I buy spiral cut ham when it appears in my supermarket, usually around Christmas and Easter. It’s pre-cooked, so it’s simple to prepare. I usually throw away the seasoning packet that comes with the ham. It’s mostly sugar (not organic, so who knows what chemicals it’s been sprayed with), and make my own glaze.

I also throw away the directions that come with the ham. I used to follow them, but the ham turned out dry or tough. I found a method of preparing spiral cut ham in The New York Times a while ago and have followed it ever since. I changed the recipe slightly by swapping out the sherry for fresh lime juice and replacing the sugar with smaller amounts of erythritol and coconut sugar. I’ve never looked back.

The ham doesn’t dry out in the oven because you add a cup of water to the roasting pan. I stick whole cloves all over the ham at two inch intervals. You don’t have to score the ham because it’s already sliced, so there are plenty of places to put the cloves.

Cover the ham with parchment and then aluminum foil (I never want aluminum touching my food) and heat it at 325 degrees F for 12 minutes per pound. The water in the pan keeps the ham from drying out while it re-heats.

About 20 minutes before the ham is done, I pull it out of the oven and coat it with a lime glaze. Pop it back in the oven, and before you know it, the ham is ready to eat. Serve it with extra sauce that’s accumulated in the bottom of the pan. If the water’s all evaporated, transfer the ham to a serving platter and deglaze the pan with 1/4 cup of water, using a wooden spoon to scrape up all that browned goodness from the bottom of the pan.

Spiral cut ham is delicious coated with a lime glaze. It's simple to prepare for a holiday feast or whenever you need a quick meal.

Place the pre-cooked ham on a rack in a roasting pan.

Press whole cloves all over the outside of the ham, about 2 inches apart.

Pour 1 cup of water into the bottom of the pan.

Cover the ham with a sheet of parchment, then a tent of aluminum foil.

Place the ham in the oven, and heat at 325 degrees F for 12 minutes per pound.

In a small bowl, mix the mustard, lime juice and sweeteners to make a thick paste.

20 minutes before the ham is done, remove it from the oven.

Take off the parchment and foil, and coat the outside of the ham with the lime glaze.

Return the ham to the oven for 20 minutes.

Remove the ham from the oven, and transfer it to a serving platter.

Pour any sauce remaining in the bottom of the pan over the ham, or place the sauce in a serving dish. (see NOTE)

Serve the ham immediately with the sauce.

Bring the spiral cut ham to room temperature. Place it in on a wire rack in a roasting pan.

Press whole cloves all over the ham at 2″ intervals.

Cover the ham with parchment, then a tent of foil to keep it from drying out. Heat at 325 degrees F for 12 minutes per pound of ham.

Take the ham out of the oven, coat it with the lime glaze, then return it to the oven for 20 minutes. Drizzle with any sauce left in the bottom of the pan, and serve immediately. 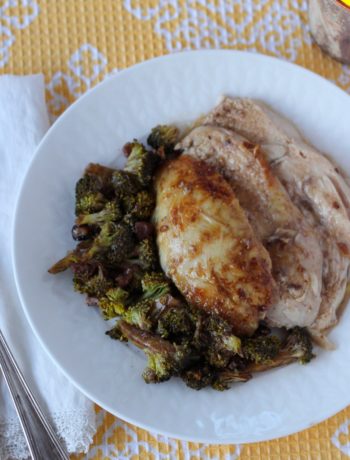 Gluten-Free Cornbread with Garlic and Scallions

How to Cook Brown Rice Safely